I am not sure what other momentous events took place in Killorglin town on April 21 1918 apart from my early arrival to join my three brothers and three sisters, later a fourth sister arrived, completing a family unit of eight. big families were the order of the day! On Monday May11th 1931 after an extensive course in Christian Doctrine, Bishop Michael O’Brien arrived in our church to administer the sacrament of confirmation, which at that time took place every third year. On that same day another joyous event was happening in the local fair field-John Duffy Circus was in town on it’s annual visit! At that time the circus was horse drawn, a moving feast of entertainment. Being a very special day in in my spiritual and social life, I decided to mark the occasion by asking a shopkeeper for the circus poster, thus beginning what was to become a life-long passion. I was captivated by the brash, bright, boastful, poster announcing that the greatest show on earth with acts from all corners of the world inviting and enticing not to miss this never to be forgotten spectacle. I was instantly smitten and continue to be so eighty years on.

Ireland owes many thanks to the circus. In the austere days after the First World War,our own wars at home left the people of Ireland in need of some light diversion from the dark days. The circus duly obliged. The first sign of their impending arrival was the sight of the advance agent in his horse and gaudy caravan. He would spend a day putting up posters all over the town before moving onto the next town or village.

Reading this poster at closer quarters I was impressed by its flamboyant design and wording. Like all trades and professions, the circus has its own vocabulary such as contortionist, pachyderm (elephant), gymnastics, aerialists, rosin back (horse),trapeze and tober. Often a performance would be described as an exquisite execution of extraordinary exploit in equilibrium. Heady stuff indeed! Thus began an avid collection of circus posters and a lifetime love of the circus.

Mr Patrick Houlihan and his Romany caravan which he built over a winter.
Photographed in June 2008.

Early in the morning, the thunder of hooves from the large stud of horses that pulled the caravans alerted us children, who waited sitting on the county bridge barley able to contain our excitement at the wonderful sight of this colourful cavalcade, with its exotic animals in tow. Thankfully I have kept the posters and programmes of the many circuses I had the pleasure of seeing over my lifetime. They are full of happy memories of shows that entertained children of all ages. The Duffy and Fossett families have been involved in the business going back to the late nineteenth century. John Duffy, known as The Barnum of Ireland, had in the 1930s, more than 100 horses and 25 caravans and wagons on the roads! He died in November 1944 and is buried in Dunmanway, Co. Cork, where he had his winter quarters. His gravestone is fittingly inscribed, The Last Milestone Passed.

In 1981 a group of circus fans, included myself, formed the Circus Association of Ireland. We did this for the purpose of promoting the circus in any way we could. Pat lynch from Killarney is our President and is himself an authority on the Irish circus. I would also like to mention the late Ken Crouch of Belfast and Niall McCabe, a native of Longford, who gave his working life in the Bronx, New York. These men were life-long collectors of circus memorabilia and supporters of the circus.

Another important aspect of my life was my involvement with Puck Fair. Three generations of my family were responsible for the erection of the Puck Fair stand and the catching of the goat fated to become Ireland's only king. I was introduced at a young age to all aspects of the organisation and running of what is Ireland’s oldest fair, as I served my time as a carpenter to my father Mikey, whose task it was to erect the stand. He also put up the buntings and banners around the town and generally looked after the whims of the reluctant monarch. The uniqueness of Puck Fair drew a lot of media attention over the years as indeed, it still does. I had the pleasure of meeting many fine journalists and photographers who were generous with copies of photos they had taken of the fair. The black and white images tell more of the story of the changes of the festival than words ever could.

Personally I felt that journalists from outside Ireland wrote the best pieces, as their perception of Puck Fair allowed us as a community to reflect more positively on what it was they saw as the essence of the fair. My Puck Fair archive is extensive and gives a full and interesting view of the evolution of rural Ireland down the years. My greatest joy at Puck Fair now is meeting the new generation of young people who love to relate proudly how their parents or grandparent never missed a year coming to Puck. Despite the complex changes and more sophisticated lifestyles of today, it seems that Puck is still holding its own. As we say here in Killorglin, ‘I never died a winter yet and never missed a Puck.’

Over the years, as my collection of memorabilia expanded, I decided to convert the basement of my home into a permanent display centre. This finally allowed me to put on view my posters, which include many theatrical posters and quite uniquely, two Famine Relief aid posters. A model horse-drawn circus caravan cavalcade, which I carved myself, complete with a Big Top, is the central attraction of the collection, plus two scale models of the Puck Fair stand showing how it looked in the nineteenth as well as the twentieth century.

Another great interest of mine is coin and old notes collecting. Even though the Free State came into being in 1922, it was six years later, in 1928, before we got our own currency. I have managed to accumulate some Ploughman notes as well as a range of other notes from back then. A double florin, half crowns, a silver dollar plus many commemorative coins make up this diverse collection. Another item of interest in my museum is a three-foot length of the transatlantic cable, which was laid from Valentia, Co. Kerry, to Newfoundland in 1864. I also have nine links of the chain that was used to drag the ill-fated car onto dry land that had driven off the Ballykissane pier on Good Friday night, claiming the first casualties of 1916. At the entrance of the museum is a basalt rock, which is six sided and unique to the Giants Causeway, Co. Antrim. The Moyle District Council (Ballycastle) gifted this to me when members of the Puck Fair committee, including myself, visited there on a goodwill trip in 1979. The Old Lamass Fair, along with the Ballinasloe Horse Fair and Puck Fair, are amalgamated as the three great fairs of Ireland.

Over the years, I have written articles for local papers on different facets of Killorglin history. My most enjoyable experience in this field was as the Killorglin correspondent for the Kingdom newspaper, which I wrote for twelve years. My archives and old photographs proved an endless source of information and inspiration.

In 1997, at the age of 79 years, I decided to write a book of reminiscences about Killorglin called Cast a Luane Shadow. I wanted to preserve for posterity my memories of the town in which I had been born, grew up in and loved all my life. Letters of appreciation from Killorglin emigrants were sent to me from those who had read and recognised events and photographs in the book.

Well now, as I write this, I am over ninety years of age. I am still as interested in collecting as I ever was. My first love and the inspiration for my hobby that has lasted a lifetime is the circus. Even today, when I visit a circus, I become that young boy once again, who was enthralled and awed by the marvellous spectacle. 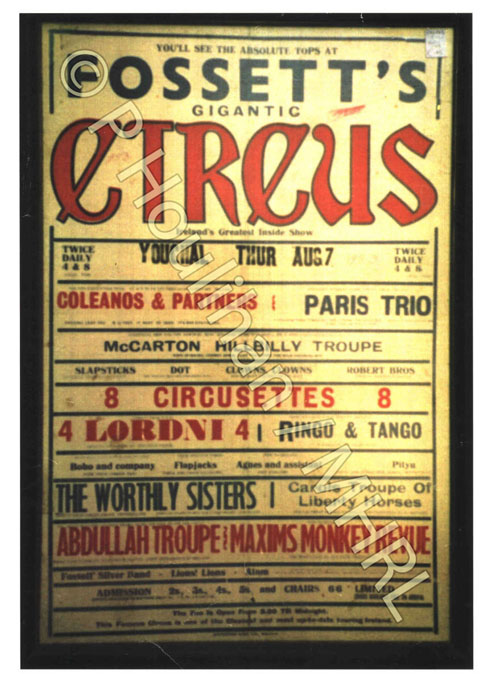